This chapter is often tricky for Organic Chemistry students as the way many textbooks present the topic is confusing, even appearing contradictory at times. The goal of this chapter is to simplify this complex material by breaking it into 3, very manageable parts.

Typically, an Organic Chemistry professor will give their students the substrate and the nucleophile/base and ask about which mechanism (SN1 mechanism, SN2 mechanism, E1 mechanism, or E2 mechanism) will be favored and the resulting product. Although we have learned about substitution vs elimination reactions separately up to this point, we will now put them together and learn how to distinguish between the two.

There are 3 factors that must be examined to decide whether a molecule goes through an substitution vs elimination:

Below is a figure showing the leaving group, substrate, and nucleophile in a typical substitution reaction:

The same language holds for elimination reactions, except a base is used instead of a nucleophile (see “Keep it Simple” below).

Example
Does the following molecule have a leaving group that can leave the molecule?

Answer
Yes, chlorine can be a leaving group here.
Example
Can a substitution reaction occur in the following conditions? Answer
No because there is no good leaving group on the substrate.

By itself, the hydroxyl group cannot leave this molecule. However, we can make a hydroxyl group into a good leaving group with a small transformation (see below).

Say that we had a molecule with an –OH, and we wanted it to leave. How could we accomplish this? What if we just turned the –OH in H2O? We can do this with the simple addition of acid.

Just like that, we are able to turn a bad leaving group into a good leaving group. Keep this concept in mind through future chapters as it is a common reaction in organic chemistry.

This one is easy. Find the location of the leaving group, and note whether it is located on a primary, secondary, or tertiary carbon on the substrate.

Factor 3: the strength of the nucleophile/base

We will classify our nucleophiles and bases as either strong nucleophile/ bases, weak nucleophiles/ bases, or an exception that fits outside the previous 2 categories. To do this, we analyze the stability of the molecule using the same acid/base principles presented in the Acid/Base Chapter. To quickly summarize how stability is related to reactivity:

Factors that affect stability include the atom on which the charge is located, the presence of resonance structures, inductive forces present in the molecule, and the orbital of the atom. If you have trouble remembering these, review this section of the acids/bases section that talks about molecular stability.

As we just mentioned above, we’ve created 3 main categories of nucleophiles/bases.

Below is a list of common molecules seen in organic chemistry, broken into their respective categories.

The flow chart below gives an easy-to-understand method for reliably finding whether the reaction will be substitution versus elimination using the 3 factors discussed above. A few points to remember from previous chapters: 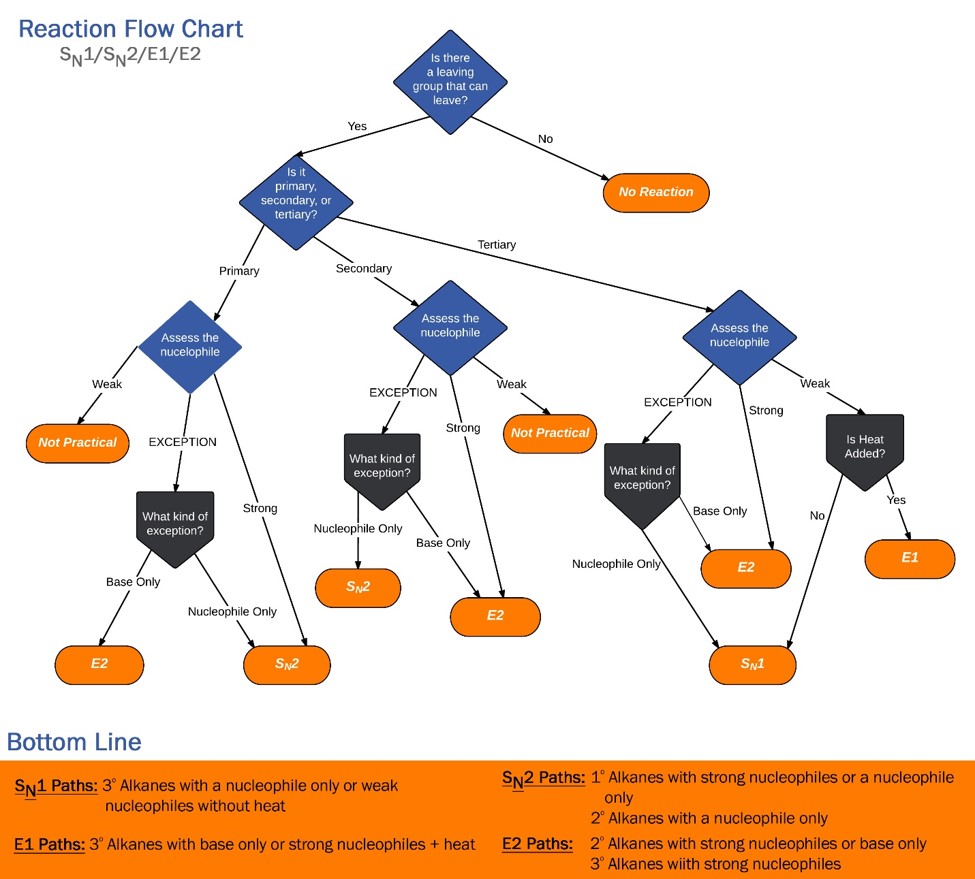 Let’s do some substitution vs elimination practice problems.

Following the flow chart above, we see this will react via an E2 mechanism. Since –OH is a non-hindered base, the Zaitsev product will be formed.

Factor 1. The Leaving Group: The leaving group here is bromine, which is stable enough on its own to be able to leave the molecule.
Factor 2. The Substrate: The leaving group is on a tertiary carbon.
Factor 3. The Nucleophile/Base: The sulfur atom containing the negative charge is an exception as it only reacts as a nucleophile.

Click Here For Substitution versus Elimination Practice Problems!
Organic Chemistry, the Simple Way
We use cookies for various purposes including analytics and personalized marketing. By continuing to use the service, you agree to our use of cookies.
Scroll to top