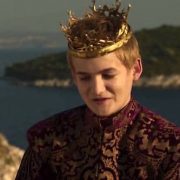 Winter is coming, but — unfortunately for us “Game of Thrones” nerds — we are in the dead of summer and will have to wait for winter again for another year. To deal with the “Game of Thrones” withdrawal, I found myself going through some of the greatest (read: saddest, or most intense) moments in the series’ history: Brienne of Tarth vs The Hound, the Battle of the Bastards and, of course, the Purple Wedding.

However, in re-living Joffrey’s death, I came across a very interesting video that takes a closer look at the poison, “the Strangler.”

For those of you who have somehow forgotten about “the Strangler” and its role in one of the most monumental shifts in power in the HBO series — or, alternatively, if you don’t watch the show at all — here’s a quick recap: Joffrey and Margaery Tyrell are married and Joffrey uses that occasion to flex his power on anyone and everyone, instead of paying attention to his beautiful new bride. In his haste to assert the power of the crown and laugh at all those beneath him, he drinks a cup of wine that has been mysteriously poisoned. He quickly finds himself choking and unable to breathe, and before long, he suffocates to death.

What was in that spiked goblet of wine that caused his death? What chemical agent was in that drink that made it earn its nickname “the Strangler”?

Well, according to Dr. Raychelle Burks of the American Chemical Society, the active agent in “the Strangler” is likely strychnine, an alkaloid. An alkaloid is a naturally occurring organic chemical compound that contains mostly basic nitrogen atoms. They are often found (in salt form) in medicine. For example, morphine prides itself on being the original alkaloid and the first true drug. As anyone could tell you, morphine is extremely useful when in moderate to severe pain. Morphine in its proper dosage can be an effective method for managing pain; excessive use can cause a powerful addiction, and overdose can be fatal — as I have mentioned before, what determines if a substance is toxic or not is its dosage.

Strychnine was once popularly used by athletes as a stimulant, where low dosages were reported to subjectively give feelings of increased stimulation. However, it was more widely known throughout history for its incredible, horrible poisonous potential. Back in 1904, Olympic marathoner Thomas Hicks collapsed while competing, and it was likely due to the two milligrams of strychnine in his system that he likely used as a performance enhancer (though, as Ian Musgrave of “The Conversation” notes, it is impossible to tell whether it was due to the strychnine or the copious amounts of booze that he had — athletes seemed to try all sorts of stuff to achieve better results). It works by blocking a glycine receptor that’s involved with normal motor nerve function in the spinal cord; that is, it interferes with the inhibitory neurotransmitter system. It thus heightens sensitivity to stimuli and results in increased, spastic muscle contraction. A high enough dosage makes strychnine one of the most fearsome poisons in history, causing such devastating muscle contractions that stimuli can make a person’s contractions literally tear their body apart.

According to the International Business Times and Dr. Burks, George R.R. Martin’s books describe how “the Strangler” was extracted to be used for the assassination of the King: with a “wash of lime” and a “rinse of sugar.” Dr. Burks speculates that Martin doesn’t necessarily mean the fruit, but rather “lime” as in a limestone product: calcium oxide. She suspects that Martin meant to use calcium oxide as a reagent to extract strychnine from its plant, Strychnos nux-vomica. As for the “rinse of sugar”? Well strychnine, as are other alkaloids, is quite bitter — think of coffee! Thus to mask the characteristic bitter taste and to make sure that His Grace was none the wiser, Martin points out that a “rinse of sugar” was needed. It would appear that this is what had happened to King Joffrey in King’s Landing. His Grace seemed to have had a goblet of wine that was spiked with a lethal dosage of strychnine. The alkaloid caused the muscles in his throat to clench so very tight — tighter than a fist, according to Dr. Burks and the Reactions video — that air was simply unable to pass throw his airway.

“Sometimes science gets a bad rap,” Dr. Burks said about science in the mainstream culture. “People think it’s dry or super serious. Pop culture is really a good medium to talk about science in a way that anyone and everyone can participate.” As we have shown here, science is a great way to connect what we see on the screen to nature and the real-life chemical world around us. It’s also a great excuse to rewatch a bunch of “Game of Thrones” clips.

Simple Organic Chemistry Tricks & Study Aids
We use cookies for various purposes including analytics and personalized marketing. By continuing to use the service, you agree to our use of cookies.
Scroll to top