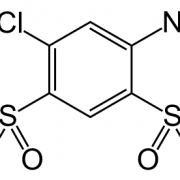 Chlorothiazide — also known as 6-chloro-1,1-dioxo-2H-1,2,4-benzothiadiazine-7-sulfonamide, or more commonly known as the commercial drug “Diuril” — is an organic compound that is used as a diuretic and an antihypertensive. The compound is a white, crystalline powder in physical appearance, and its functional groups and structure highlights its slight solubility in water and high solubility in sodium hydroxide. As was mentioned above, chlorothiazide is used as a diuretic and an antihypertensive. It essentially functions as a “water pill”: when administered, the body expels the extra salt and water in the system, lowering the person’s blood pressure through increased urination. How does chlorothiazide perform these functions? It prevents chloride reabsorption in a part of the kidney and urinary tract called the distal tube. Thiazides as a family of compounds cause a loss of potassium and an increase in uric acid in the serum. Furthermore, they inhibit sodium ion transport across renal tubular epithelia by binding to a thiazide-sensitive sodium-chloride transporter. What this amounts to, put simply, is an increase in potassium excretion.

Chlorothiazides  have been shown to act effectively as antihypertensives not necessarily because they promote urine output, but through promoting the activity of calcium-activated potassium channels in vascular smooth muscles while simultaneously inhibiting nearby proteins called carbonic anhydrases.

The deuterium premium: how deuterating drugs can change pharmaceuticals as we...
We use cookies for various purposes including analytics and personalized marketing. By continuing to use the service, you agree to our use of cookies.
Scroll to top