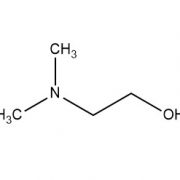 2-(dimethylamino)ethanol, otherwise referred to as dimethylethanolamine (DMEA), is a compound that has a tertiary amine and terminal alcohol group. This gives it a water solubility characteristic, and the alcohol group at the end of the molecule in particular allows for ester derivatives.

Also known as deanol, the compound is involved in the formation of acetylcholine, a very important chemical found in the human body used for neurological signaling, otherwise referred to as a neurotransmitter. Deanol is used for one form of treatment for ADHD, Alzheimer’s disease,  autism and a form of motor disability called tardive dyskinesia. It can help with boosting one’s memory, their mood and neural processing.

Furthermore, it grants a ton of physical benefits: increased physical energy, oxygen efficiency, athletic performance and muscle reflexes, as well as maintaining skin appearance — it is a super compound!

That is why many sites, even bodybuilding websites, refer to it as the secret to the “Fountain of Youth.” Many believe that its secret to gifting its users appreciable physical improvement and cosmetic beauty is because it might stabilize cell membranes through the stimulation of acetylcholine; others believe this compound accomplishes this stability by reducing the accumulation of lipofuscin deposits (which is essentially cellular waste that contributes to the natural aging process) inside cells.

On the industrial side of things, DMEA — with it water solubility characteristic — is largely used due to its reactivity and involvement in various intermediates. In one example, it is used to produce agents that will help purify water. In another, it is used to get to an intermediate to synthesize pharmaceuticals, including anesthetics.

Memorizing ‘Don’t Memorize’: The Orgo Oxymoron
We use cookies for various purposes including analytics and personalized marketing. By continuing to use the service, you agree to our use of cookies.
Scroll to top