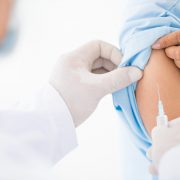 “How childhood immunization — once a given — crossed the divide from breakthrough science to public policy debate in the space of 50 years is a complicated picture,” Laura Parker of the National Geographic wrote about vaccines and the still-closely-contested controversy over their use (or lack thereof) in our society.

The anti-vaccine movement is “rooted in distrust of government and science,” Parker explained. “Then add the rise of citizen science — which has activists doing their own research — and grassroots movements focused on holistic lifestyles, and you are left with the distilled essence of parents who are skeptical and politicians who see opportunity.”

Thus, it emphasizes the importance of having the understanding of the organic (and inorganic) chemistry that  underlies vaccines and how they work in our bodies — and who better than a group of students taking organic chemistry and mastering the subject here at Orgo Made Simple?

In a blog that explains the basic chemistry of vaccines, the blogger “The Original Skeptical Raptor” (TOSR) lays before us “five simple chemistry facts” that they wished to apply on the the chemistry of the hotly debated vaccines. The five facts were:

These are five facts that are indisputable and can be taken for face value. When applied to the argument for or against vaccines, it becomes abundantly clear how vaccines are made to benefit and help the human population prevent outbreaks and recurrences of once-devastating diseases such as polio and measles.

Even a basic understanding of chemistry could help ease a lot of anxiety over the use of vaccines. Particularly highlighting TOSR’s fifth point, they use the example of NaCl — a simple ionic compound made up of a metal (sodium) and a gas (chlorine). By themselves, we would admittedly have a problem and it would be a wonder why, with pure sodium and pure chlorine, we aren’t all blowing up or dropping by the numbers.

As you may know, pure sodium is highly reactive with water and, when exposed, can really “spark” some interest (pun absolutely, awfully intended). The exothermic reaction looks like this:

The reaction releases heat that could potentially ignite the hydrogen gas emitted, which will then burn and cause an explosion.

(Maybe not quite this, but an explosion nonetheless).

Meanwhile, the toxicity of chlorine gas is explained by it either diffusing into epithelial lining fluid of respiratory epithelium or hydrolyzing to HOCl and HCl, which in turn generate chloride anions and reactive oxygen species that further damage tissue and machinery in cells.

However, the important thing to know is that this is not a worry with NaCl, which behaves totally different from its chemical ionic components. As you have known for years, ingesting table salt NaCl is absolutely fine (until you get into issues of excessive consumption and high blood pressure, but that’s another story for another day).

A “little chemistry and even common sense and logic,” as noted by commenter “Star Bricker,” will take you a long way and help explain why vaccines have been, and will continue to be, just fine for people and beneficial for society. Though it is somewhat understandable how some people are so misinformed — as Parker of the National Geographic explains it, “the Internet [has become] an incubator for misinformation like the now-discredited theories linking vaccines to autism, and celebrity activism that turns small causes into bigger ones” — all it takes is a fundamental understanding of chemistry to alleviate any kind of worries concerning vaccines.

Many of you will go on to matriculate to medical school, so this is especially relevant and further underscores the need to understand organic chemistry and how it is applicable to not only your lives but the lives of society around us.

Breaking down the chemistry in ‘Breaking Bad’
We use cookies for various purposes including analytics and personalized marketing. By continuing to use the service, you agree to our use of cookies.
Scroll to top